During the past 24 hours, I’ve received three separate Etsy orders (each for one inexpensive item) that appear to be from spambots. The email addresses associated with the accounts are strings of random characters, as are the mailing addresses they provided.

I canceled and refunded each order with a short message to the “buyer” stating that I can’t mail anything to a nonexistent address. I also blocked the users for good measure. I then sent a support request to Etsy for each order to report the account and notify them of suspicious activity.

I feel like I’ve done my due diligence, but I couldn’t find any other accounts of sellers receiving orders from spambots. What I did find were reports of all sorts of other scams and misbehavior on the platform.

Based on an hour of research, most of which was spent browsing through various forums, I learned that there are two main types of scams targeted at sellers. The first involves the sale of small items (generally crafting supplies, such as individual beads) for the purpose of stealing the tracking numbers. In other words, the buyer will use the tracking number you provided to “ship” an order they received and have no intention of fulfilling. The second involves high-quantity sales shipping to freight distributors (generally in Florida or California), which will forward the merchandise to another merchant who will then resell it. “Scams” might not be the right word for these transactions, which seem to be associated with overseas merchants from a certain country, but there’s still something fishy going on.

I also learned that the knitting community on Etsy has a lot of drama. It’s apparently not uncommon for someone to buy a digital pattern and then offer it for sale at a cheaper price on their own store, for instance. It’s also not unheard of for someone to make something directly from a pattern they bought and then sell it at a premium without contacting or crediting the original artist. On top of that, there are people who will spend actual money to hurt another seller by purchasing a lot of inexpensive items and then using those orders to bomb the store with bad reviews and formal complaints. Even crazier, some people will order a ridiculous quantity of a custom-made listing (which generally don’t have inventory limits), knowing that the seller will cancel the order and that they will be able to use the cancellation as an excuse to report the store to Etsy.

Along the way, I read a few horror stories about art and crafting commissions gone horribly awry. With two truly bizarre exceptions, every commission I’ve done has been as smooth as silk, and I was shocked by the behavior I read about. To summarize, many people seem to expect that, because they’ve paid the initial commission fee, an artist must devote endless hours to making a long series of requested changes to their work. People also seem to expect that, after this work is done, they can reject the finished piece and ask for a full refund.

In the cases involving individual people (as opposed to overseas businesses), the story generally included a lengthy lead-up in which the buyer raised all sorts of red flags in their conversations with the seller. I think there’s a lot of pressure on people selling their creative work to be “nice” and “accommodating,” and I think this pressure influences them to tolerate strange interactions with people who make them uncomfortable.

The take-away point from all of this is not that Etsy is broken (which is a different conversation altogether), but rather that setting clear boundaries is good professional behavior. The standard American customer service mentality that “the customer is always right” only makes sense as a social contract if both parties enter into it in good faith. If the customer is unbalanced, however, that level of accommodation is toxic, and sellers – especially young women selling their creative work – need to feel empowered to cut off communication and step away from bad transactions.

I was at an academic conference last weekend, so I had to hit the ground running for the second week of classes. I’m teaching two entirely new classes this semester, and both of them require a lot of prep work. I’m doing my best to stay on top of my writing, but I’m afraid the next three months are going to involve making a lot of slideshows and handouts, not to mention keeping up with grading and emails. This is what I managed to accomplish during the week…

– The co-editors of the academic essay collection of JRPGs I mentioned in an earlier writing log told me that my abstract about the influence of Studio Ghibli on the Zelda series isn’t a good fit, so I submitted another abstract based on their suggestions. The new abstract is for a paper titled “Empowered Androgyny and Queer Masculinity in The Legend of Zelda.” I’m excited about this project, and I’ve already started putting together a bibliography and an outline for the paper.

– I’m also plugging away at a few other academic publications, including an article on Hiromi Kawakami and a lengthy book review.

– I submitted the final drafts of my story and comic script to a fanzine about Ganondorf.

– I posted Chapter 25 of Malice on AO3. This is the halfway mark of the novel, and I’m very happy to be here! At this point I probably need to take a short break to do some research and rework my initial outline as I prepare to write the second half of the story.

– I’ve been editing Chapter 23 ever since I posted it, and I think it’s finally in a decent place. I therefore posted the chapter on FFN, which is where I put chapters when I’m sick of looking at them.

– I’ve been doing my best to respond to comments on AO3. I’m lucky to have found a number of very smart readers, and I love responding to their thoughts, but I can only be so clever on any given day. I got through about two dozen comments this past week, and I really enjoyed myself.

– This required a lot of phone calls, in-person meetings, and paperwork, but I managed consolidate all of my debt under a larger loan with a low interest rate. If you don’t know what effect not having to worry about debt has on writing, then you’ve probably never experienced economic precarity. And that’s great, but you’re going to have to take my word for it that this is a major step forward in my creative life.

– Speaking of money! Sticker Mule was having a big sale at the end of January, so I made vinyl stickers of two of my recent drawings. I’m doing my best to keep up a consistent art practice despite an intense work schedule, and it helps to complete small projects like this, even if it’s just a hobby. 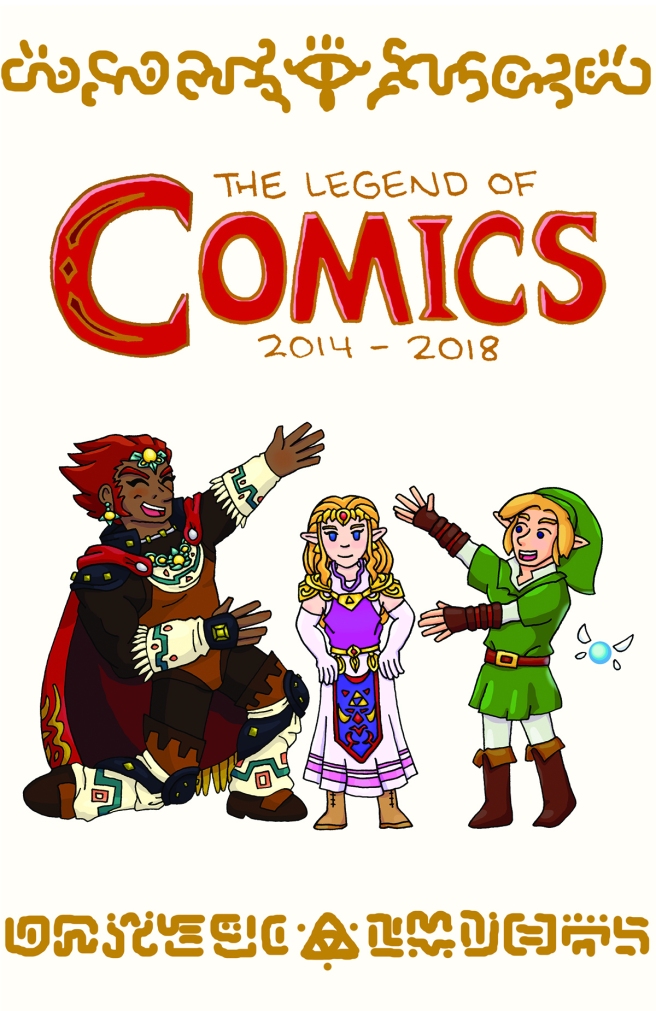 The Legend of Comics is a collection of drawings and short comics I posted on Tumblr between 2014 and 2018. This zine is 32 pages long, standard half-letter size, and filled with my love for the Zelda series.

I sold several dozen copies at the DC Zinefest this summer, and I also took a few copies to my local comic book store, Fantom Comics. I put the remaining copies on Etsy, and they sold out quickly.

This zine was fairly successful, but I don’t think I’ll do another print run. I had little to no idea what I was doing on Photoshop until relatively recently, and my art has evolved significantly since then. The way I drew Ganondorf in particular makes me cringe.

I also had a strange experience on Etsy in which someone bought this zine as a present for their six-year-old child. My understanding of both zine culture and Tumblr culture is such that I never would have expected someone to associate either of those things with the notion of “kid-friendly,” and the parent was (understandably) offended that the zine contains adult humor. I therefore had to put a disclaimer on the Etsy listing that reads “The zine contains two instances of strong language and one mildly risqué allusion to an old internet meme, and it’s probably not suitable for young children.”

This incident helped me realize that presentation and curation are important, even for an amateur fanzine. I think it might also have been good to include captions for some of the comics whose humor is closely tied to my specific corner of Zelda fandom. I printed this zine in February; and, after six months of reflection, there’s a lot I would do differently now. Instead of trying to revise this zine, I’m looking forward to implementing my ideas into a new Legend of Zelda fanzine that I’m planning to publish next January. 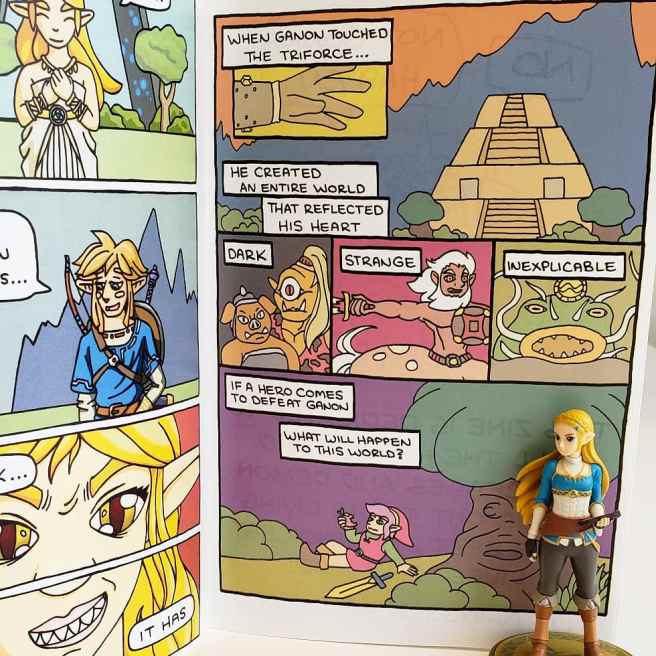 Everything You Never Wanted to Know About What’s Wrong With Etsy
https://sydneyschuster.wordpress.com/2018/12/28/everything-you-never-wanted-to-know-about-whats-wrong-with-etsy/

Etsy reported $81.8 million net income in 2017. From 1.9 million sellers. That’s $43 annual net income per seller. Etsy’s profit in 2018: 3.3%. Why build a sprawling, insane Rube Goldberg contraption that ranks 60 million listings by criteria sellers can’t control and then hides most of them from buyers, to get $43?

Answer: stupidity, cluelessness, incompetence, cruelty, and unreported cash. So Etsy, is you is or is you ain’t a retailer? When you figure it out, let us know.

Punch through all that bullshit and it becomes obvious to even the most tech-challenged crafter or junk dealer that it shouldn’t take years to sell the same widget on Etsy that sold in a week on eBay or Amazon.

This long blog post about Etsy’s many dysfunctions is extremely detailed. Some of the hyperlinks no longer work, presumably because they were taken offline, but everything I followed up on seems to check out. Despite the fact that we’re operating on different scales, the author’s experience as a seller on Etsy reflects my own, and her essay gave me a better understanding of why certain aspects of my experience with buying and selling zines on Etsy have always felt so weird to me.

In essence, the trouble seems to be with the site’s algorithms developing in counterproductive ways due to the deliberate meddling of the site’s administrators and corporate leadership. The author makes a good point at the end of the essay when she asks why anyone would want to create such a hostile environment that doesn’t seem to benefit anyone. Based on what we know about Facebook, I suspect that Etsy may be making its money as a tool for market research and algorithm development, not as a business front or hosting service.

Despite this, I continue to use Etsy, just as I continue to use Amazon and Twitter. I receive tangible benefits from these services, and I also believe that it’s not a meaningless act to engage with these sites in a way that attempts to make good on their utopian potential. At the same time, however, I think it’s good to be aware of the flaws and broader implications of these systems, as well as to seek out and support alternatives. Unfortunately, that’s easier said that done, as the alternatives are often just as problematic.