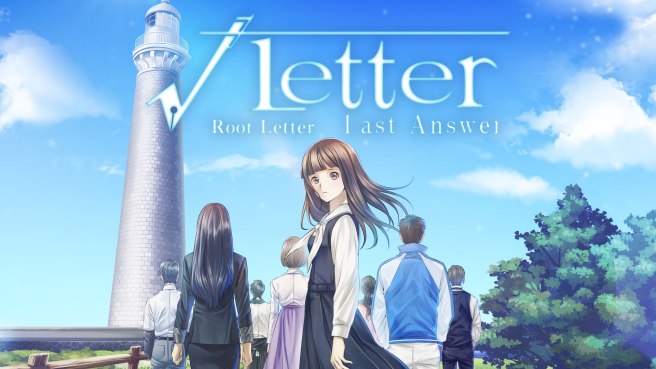 Root Letter is a mystery-themed visual novel that should take most people about six or seven hours to play. I’ve read a number of positive reviews of the game, so I went ahead and downloaded a copy onto my Nintendo Switch when it went on sale at the end of the year.

You play as Takayuki, a thirty-something white collar worker who’s left his job at a design firm and has a bit of free time before he’s scheduled to start a new job. When he goes home to visit his parents, he finds a set of letters from Aya Fumino, his pen pal from his senior year of high school. He’d exchanged nine letters with her, but he discovers a tenth at the bottom of the stack that he doesn’t remember reading. In this letter, Aya tells Takayuki that she can no longer continue their correspondence. She apologizes, saying that she has killed someone.

Takayuki decides to try to find her in Matsue, a city on the Sea of Japan about halfway between Osaka and Hiroshima. When he arrives at the address on the letters, however, he finds an empty lot. A passing neighbor tells him that the house burned down fifteen years ago, so he checks the records at the city library. He learns that, while a girl named Aya Fumino used to live in that house, she died twenty-five years ago, long before she could have written to him.

Why did the house burn down? Who was pretending to be Aya Fumino? And who did she kill?

With a week of free time and an intriguing mystery on his hands, Takayuki sets about tracking down the seven friends his pen pal mentioned in her letters. None of them want to talk to him, however, and everyone claims not to know anyone named Aya Fumino, even when presented with her photo. Your goal, as Takayuki, is to find and interrogate these seven adults in an attempt to figure out who “Aya Fumino” was and what happened during her senior year of high school.

There are five possible endings to Root Letter, but its gameplay is almost completely linear. You use a drop-down menu to move between various locations in Matsue as you follow various hints and clues, and the “Think” command on your menu will (almost) always tell you where the game wants you to go next. The interrogation scenes feature a few Ace Attorney style elements that involve presenting the right piece of evidence at the right moment, but this is also extremely linear. There’s no reward for exploration or creativity; but, thankfully, there’s no punishment for failure. Root Letter is much more of an interactive novel than a game, and it’s not interested in derailing your progress through the story.

The ending you see is determined by your choice of how Takayuki responded to the letter from Aya Fumino that’s presented at the beginning of each of the game’s chapters. You’re given two sets of choices per letter, and your options tend to fall into discrete categories at don’t make much sense unless you already know which ending you’re trying to unlock. Like the shitty casual gamer I am, I chose a “normal” (to me) range of mixed responses and got the worst ending, in which the whole mess about Aya Fumino was a government conspiracy to cover up an alien invasion.

My advice would be to avoid my rookie mistake by consulting a guide to the endings before you begin. Don’t worry about spoiling yourself, because Root Letter’s story is so convoluted that none of the endings will make sense if you haven’t played the game.

It’s my understanding that the “default” ending, meaning the ending you’ll see if you always choose the first response option, is a bittersweet story about missed connections, growing up, and letting the past go as you move on with your life. Another ending, the “Cursed Letter” ending, is about the power of teenage imagination to create both urban legends and personal identity; while another, the “Princess of Himegamori Forest” ending, is a horror-themed exploration of local Shintō folklore.

One of the main benefits of playing the Last Answer edition of the game (as opposed to the original 2016 release) is that it contains an optional “drama mode.” The drama version of the game uses photos of real actors and locations; and, based on what I’ve seen, the photography is quite polished and surprisingly faithful. Having played the game through once with anime illustrations, I’m looking forward to playing it again in drama mode at some point in the future.

While Root Letter pushes the player forward with the strong forward momentum of its mystery story, it also invites you to take time to appreciate the sights of Matsue. As Takayuki, you’ll get to stay at a traditional hot springs inn, stroll through the forested grounds of Matsushiro Castle, visit art museums, and eat at trendy cafés. Root Letter leans especially hard into its celebration of the local cuisine, and I’m excited about the prospect of being able to enjoy photographic depictions of Matsue’s food culture.

Unfortunately, some elements of the game haven’t aged well, probably because they were never attractive to begin with. To give an example, one character admits to a violent attempted rape, and the other characters just sort of shake their heads and move on. If this assault only comes up briefly and is never mentioned again, why include it in the story at all? Likewise, “Aya Fumino’s” fake suicide is teased fairly early in the game but isn’t given any dramatic weight. Rather, it’s played purely for shock value, with the implicit understanding that this sort of thing is just what moody high school girls do.

Some of the most uncomfortable parts of the game involve a character nicknamed “Fatty.” This character’s entire arc is about how he’s overweight, and about how overweight people are weak and gross and unlovable. In order to psychologically break this character during his investigation, Takayuki taunts him with chocolate-covered potato chips, which he can’t resist because, at the deepest core of his being, he is and will always be a big fat fatty. The whole thing is super gross, especially in combination with the casual gay panic thrown into this chapter. I feel that this is one of the many instances in which a more judicious localization could have made some slight changes, not to erase this type of bigotry and meanness, but to mitigate it somewhat.

The player’s enjoyment of Root Letter is largely based on its story, so it’s a shame that the translation is so lackluster. It’s perfectly serviceable, and it’s far from unreadable, but it has numerous quality control issues that would be tedious to list. My main complaint is that the translation received very little localization, which is frustrating in terms of both story and gameplay.

Regarding gameplay, the lack of a localization has rendered it somewhat difficult to talk to or interrogate people, as there are numerous instances in which none of the dialog choices make the slightest bit of sense. The game isn’t that complicated, so you can brute-force your way through the poorly translated bits by trial and error, but it goes without saying that you shouldn’t have to.

It’s tricky to discuss the situations in which localization would have been preferable to a direct translation without resorting to an infodump, but I can give one example that’s fairly self-explanatory. One of the friends Aya Fumino mentions in her letters is nicknamed “Bitch.” In Japanese, the loanword bicchi doesn’t necessarily mean “mean girl,” as it does in English. Rather, it’s the 2015 version of gyaru or kogal, and it refers to a teenage girl who dyes her hair and uses tanning lotion and dresses in trendy clothes and pays a lot of attention to the entertainment industry. The English equivalent of this term changes from decade to decade; but, given that Takayuki probably went to high school around 1998-2001 or thereabouts, “valley girl” or “Barbie girl” might work. The character nicknamed “Bitch” is actually quite friendly, so listening to the other characters talk about how much they used to admire their friend “Bitch” is bizarre.

Root Letter has some definite rough patches, but I want to emphasize that I enjoyed this game. I spent a week playing it, reading for about an hour every day, and I had a lot of fun with its ridiculous characters, charmingly convoluted plot, and unapologetic embrace of virtual tourism. I’m happy that I finally got a chance to play Root Letter, but I’m also happy that I was able to get the game on sale, because I’m not sure it’s worth more than $20.